Back to Patient Education

The shape of your nose can give your face “character,” but it may also give you headaches, breathing problems, sinus infections, and cause snoring.  The septum in most people’s nose is naturally a bit off center.  The septum is the wall that divides the breathing passages in the nose down the middle to form the nostrils.  People with a deviated septum have a severely off center or crooked septum, which can lead to health problems.  A deviated septum may be present at birth or result from injury.  Fortunately, a deviated septum can be fixed with a relatively simple surgical procedure.
Back to top

People may be born with a deviated septum, but it may also result from a broken nose.
Back to top

A deviated septum may make it difficult or impossible for you to breathe through either nostril.  You may snore or experience sleep apnea, a condition where breathing temporarily stops during sleep.  Some people have frequent nosebleeds.  You may develop headaches, facial pain, and sinus infections if natural nasal drainage is blocked.  Colds and allergies may make your symptoms worse if they cause the nasal passages to swell and narrow.
Back to top

Your doctor can easily diagnose a deviated septum by reviewing your symptoms and examining your nose.  A nasal speculum allows the doctor to gently spread your nostril open before using a light to examine the position of your septum.
Back to top

Treatment may depend on the severity of your deviation and symptoms.  Some people may simply benefit from medications to help drain the sinuses and reduce swelling in the nasal passages.  For people with severe symptoms, surgery may be used to correct the deviated septum.  Most people experience a significant reduction in symptoms following septoplasty, a surgical procedure that is used to fix a deviated septum.  It is performed through the nostrils and involves repositioning, reshaping, or removing sections of the septum to correct its position.  Septoplasty is usually an outpatient procedure.  It may be performed with general or local anesthesia.  Following surgery, the nasal passages are packed with gauze and medication to collect drainage and prevent infection.  A rhinoplasty, an elective surgery to reshape the nose, may be performed at the same time as a septoplasty.
Back to top

If you participate in sports that carry a risk of nose injury, wearing protective face equipment can help protect your nose.
Back to top

Am I at Risk

Your risk is increased for deviated septum if you participate in activities that increase your risk for a broken nose.  Such activities include fist fighting, boxing, and certain sports.  Injuries from violence and accidents may also cause a deviated septum.
Back to top

An untreated deviated septum can lead to repeated nosebleeds and sinus infections.  If it contributes to sleep apnea, it is concerning because sleep apnea can lead to heart problems and death.
Back to top

This information is intended for educational and informational purposes only. It should not be used in place of an individual consultation or examination or replace the advice of your health care professional and should not be relied upon to determine diagnosis or course of treatment.

Don’t be left out! Keep up with the latest in natural-looking face and body aesthetics plus news about the spa and special events we sponsor.

There’s a lot to learn about the wide variety of nonsurgical cosmetic procedures we offer. Explore our patient education center. 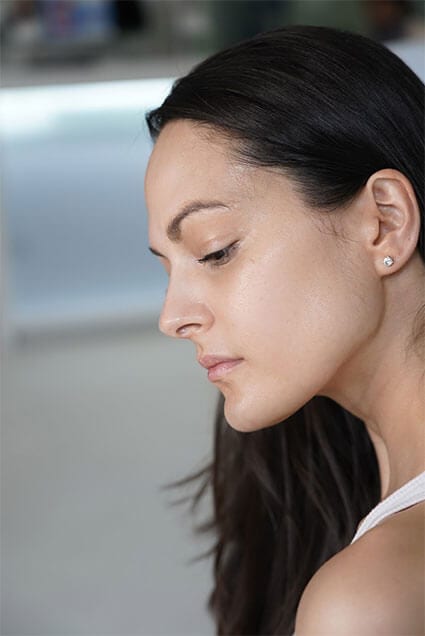 Don’t forget to tag us in your social media posts!
@glamoimedspa #glamoimedspa

The aestheticians at Glamoi Med Spa in Manhattan and Queens, NY, provide a variety of treatments for the skin, body, and face. Become a Glamoi Med Spa member today and save!